Skip to content
Home » News » We Have Nothing Against Charter House On VGMA Nomination: Famouz (1,301 Views) » Share To.. 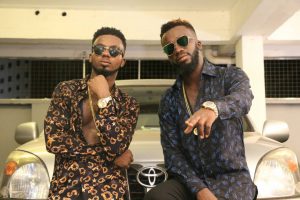 MUSIC Duo Famouz in recent interview complained on why people say their song Nufuo Nu is a profane song but one corner on the other hand is not,

We never said anything against Charter House on the VGMA Nomination about the headline in the news papers that DON’T NOMINATE ONE CORNER OR ELSE….
That is a fake story which didnt come from us famouz we were only asked why nufuo nu is not everywhere as one corner in our recent interview which we explained that people in the music industry and some others are complaining that nufuo nu is a profane song so they cant play it on air and places but in other hand one corner and nufuo nu are all same class of song so if u say nufuo nu is profane the so is one corner also profane so why criticise nufuo nu and praise one corner.

We never have anything against any media or charter house and we know nothing about any of the headlines in the papers so stop painting famouz black to the people we love our fans and we love Ghana the Music Industry is for all,

We have more hit and wonderful tunes so why should we fight over nufuo nu against one corner patapaa is nothing compared to famouz because we are versatile and do good musics like #Energy which we featured Epixode on,Soloku which also features Nii Funny,Nothing Give Dem which also features Article Wan and other hit songs which are currently trending in town like Awure , Party Gbee and others


All we want to say is Ghanaians should find out the real story and listen to the other side before judging because the fans sometimes just act on what they first hear without even knowing the story.