Samini and Shatta Wale finally collaborate on a song (Listen Up) 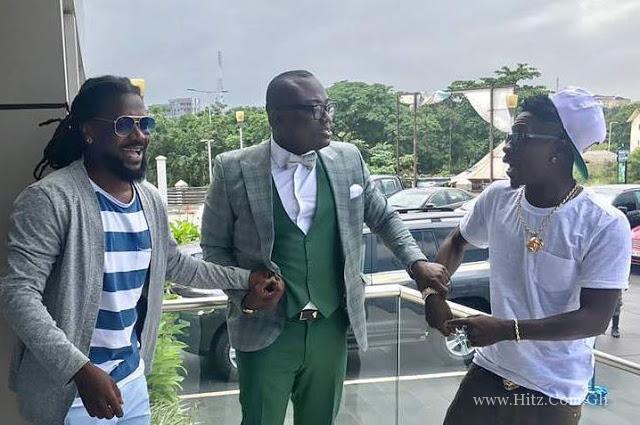 Home » News» Samini and Shatta Wale finally collaborate on a song (Listen Up) » Share To..

Dancehall rivals Shatta Wale and Samini, have finally collaborated on a song together. They freestyled during the latter’s interview on Starr Chat on Starr FM, Wednesday evening.
Over the years there has been tension between the two dancehall acts with each claiming to be king of the genre, but they both eulogised each other’s talent and contribution to the music industry in Ghana.
Many doubted a day like this will never happen. It was orchestrated by host, Bola Ray who had two weeks ago brought them together during Starr FM’s third year anniversary.

During the interview with Bola Ray, the arch rivals were put to test for a collabo on air.
Shatta Wale acknowledged Samini for paving way for the likes of him.
“I want to tell him that he has paved the way for some of us and we really respect him for that. We thank him for his understanding and the love he has for the industry. People feel may be I have stepped on his toe and all that but he is a brother and he knows what he is about, big ups Samini, Long live Samini”.

“I have always said it, and will always say it again that there are people we need to celebrate. He has been a legend in our industry and I believe he has done what he can to help Ghana music grow, he is one of my favourite artiste when it comes to the genre of music and dancehall. He has followed and he is an icon to Ghana and he is one great Star that we should always respect and celebrate”. Samini has described arch-rival Shatta Wale as a gem.