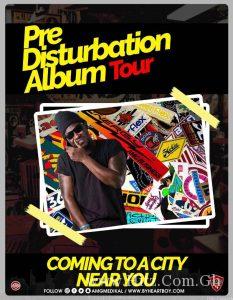 Arab Money Gang Business artist and the current trending rapper Medikal is preparing to drop to his Disturbation Album which is just few weeks away. The album is set to drop on the 7th Of July 2017. But on an interview with the rapper,he is up to something great for his fans which is a pre disturbation album tour.


He is touring a city near you so dont be left out.prepare yourself for this  one and have the opportunity to listen to some of the jams on the album first befor it drops and also have the chance to take pics with the rapper. Get urself prepared because its coming to a city near you soon. we will update yall when its the turn of your city. Poof poof swerg.