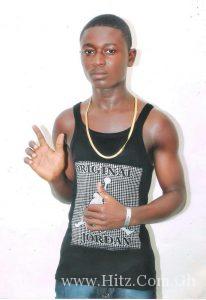 Adomako manu solomon ( also knwon as) Kissme is a Ghanaian Hip life & RnB musician. He was born in 1996 at Awhiaa Overseas in Kumasi of the Ashanti Region of Ghana. He comes from the Aduana Royal Family of Nyinanhini of Atwima Mponua District. His parents are Mr. Asiamah Blankson who comes from Kumawu Drobonso of Sekyere Afram plans and Mrs.Amponsah Mercy who comes from The royal family of Nyinahini of Atwima mponua District who’s father was also the king of Kumawu in some years past. Kissme is the fourth born out of the six children of his parents. This Super Star went to Buokrom Estate M/A primary School and continue his JHS at Buokrom M/A Block B in JHS1, He then went to Awhiaa D/A JHS  and completed his JHS at Adwumam Manhyia JHS in 2011.
He also went to Atwima Kwanwoma Senior High School AKASS In Trede when he was in SHS 1. He Then went to Sea School at Dwenase to continue his education when he was is SHS 2 and then Completed his Secondary School at Hope College in Kenyasi in the year 2014.
Kissme started playing Drums in Church when he was 9 years of age and also used to play Guitar when he was  13 years.
This Super star had his own rec


ord label when he was 18 years which was BLOG MONEY MUSIC RECORDS and he released his first single which was tittled NWOMPA prod.Tims Beatz . In 2015-2016 he changed the name of his record label to BAD BOYS ENTERTAINMENT and started working with Blaq Wolves . And he  released his second single Tittled : Sexy Girls in November 2016 which Blaq wolves were featured. In february 2017 Blaq Wolves also released their first single which was tittled baka and Kissme was also featured as we were all expecting