Shatta Wale is battling with kidney problems – Ibrah One 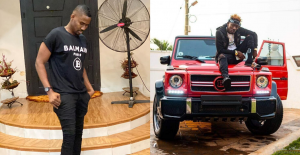 Home » News» Shatta Wale is battling with kidney problems – Ibrah One » Share To..

Shatta Wale, according to his estranged friend Ibrah One’s revelation is suffering from and battling a serious kidney problem but he’s hiding it from the media.

The young millionaire called for fervent prayers to be said for the Dancehall musician after he broke the news to the public. This info from Ibrah One has come as a surprise to the public. They wonder where the socialite got his information from.

He shared this unconfirmed information on his Instagram page. He wrote; “Shatta Wale is battling with kidney problems, he needs prayers even though he’s trying to hide it from the media”. Shatta Wale, on the other hand, has announced his soon retirement from full-time music in an interview with ace broadcaster Andy Dosty sometime ago.

Could what Ibrah One is alleging be the underlying reason for Shatta Wale’s intentions of quitting music hence his absence from social media? Well, time will be the best judge. See screenshot below; 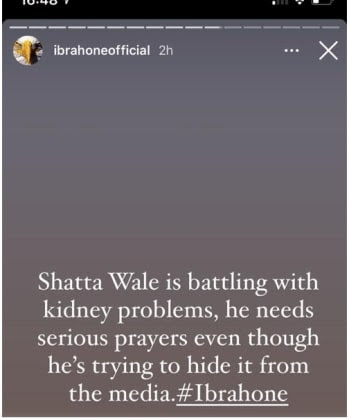