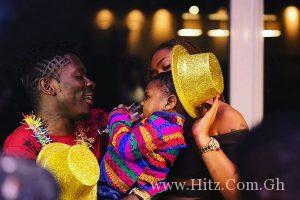 Baby Mama of dancehall act Shatta Wale has tipped her son, Majesty to be a music star in the future.

Shatta Michy revealed that her son, Majesty, born on July 11, 2015, is already into music at a young age.

“Majesty is going to be doing music soon. I won’t be surprised because he has got good timing already. It’s a family thing and we intend to keep it there,” she told JoyNews’ Becky.


Shatta Michy stressed that she and her ‘Baby Daddy’, Shatta Wale have plans of making music a generational journey in their family.

Shatta Michy, who owns Diamond Pub, developed a sudden interest in the music after she featured in Shatta Wale’s ‘Low Tempo’.

She said that she is willing to take the music seriously and told critics, who try to discourage her from pursuing music, to stand aside.

Shatta Michy described them as haters and appreciated her few fans who love and encourage her music.