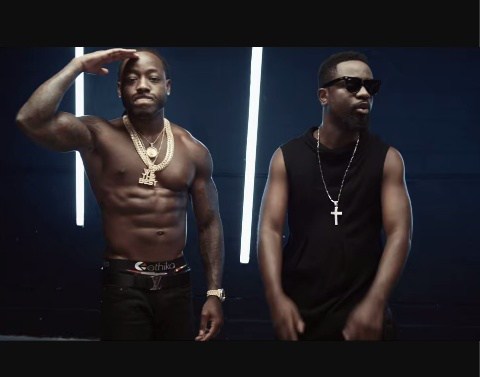 It looks like American Rapper Acehood is sick and tired of Sarkodie and his many lies as he finally comes on Twitter to clear the air on Sarkodie. Many believe that to this day the American Rapper is furious over Sarkodie failing to deliver the promise of building him a statue even after 5 years.

You Might Also Like:  "BRONYA ADE3" Hitmaker was cut off from stage by the organiser while performing


Reacting to a video where Sarkodie claims to have been contacted by Acehood for a feature, the American rapper called out Sarkodie.

It can be recalled that in 2015, Sarkodie featured Acehood on his single New guy.

At the time, that was the biggest feature in the country. However when it surfaced that Sarkodie paid a collosal amount of money to the American rapper, it became a huge debate in the country.

Now Sarkodie is claiming Acehood contacted his management for another feature but it seems Sarkodie couldn’t fabricate the best of a lie as Acehood came out to debunk the claim. He reacted to a video of Sarkodie bragging about how acehood was in his dms for another collaboration and stated that it was a complete lie. He further stated that he wish nothing but the best to Sarkodie.

The tweet as spotted is currently the most talked about issue on Twitter with almost everyone jumping on Sarkodie’s neck with the kabutey tag. We are yet to receive word from fellow rapper and long term rival Asem. We are waiting patiently and hope it’s hilarious as usual. Why Sarkodie is stressing himself with all these lies is suspected to be caused by the pressure of his arch rival and former friend Shatta Wale cruising high alongside American pop star Beyonce.

Fake it till they believe it. That’s Sarkodie’s new slogan now. Check the post below ;Screenshots : American Rapper Acehood Exposes Sarkodie Over His Plenty Lies.

But on a serious note,
Sarkodie seriously u dey lie ooo, how can ace hood bell ur agent den u go feature am on ur track again, the track “new guy” u @sarkodie then @Acehood a no dey barb la!! So u wan talk say, Ace hood do ahohyihy3 anaa, secof u be sarkodie? Smh 🤦‍♂️ pic.twitter.com/T8WZRBr7vw