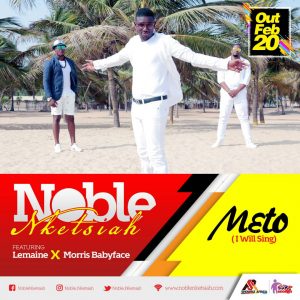 Explaining why he has been absent from the music scene for a while now, Ghanaian Gospel musician Noble Nketsiah, in his first facebook live streaming, released his very latest song titled #Meto (I Will Sing): “I have recorded over 35 very good songs but have been struggling on which to release at what time. Also, I have been working behind the scene and ready to re-launch the Implementation Phase of my ‘Kids-Off-the-Streets’ Project”.

The Care Enough /Showbiz Africa artiste will release three new songs before the official launch of his 6th album on May 26, 2018, according to his publicist, Larry Ekow Hagan.