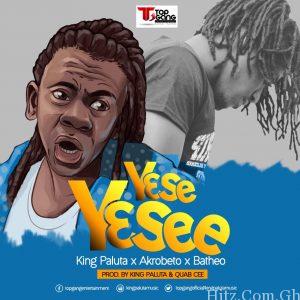 A new banger is set to be released from the camp of Top Gang Entertainment which features their Top Artist *King Paluta*. This news was broken in an interview where *King Paluta* revealed that hes got a surprise for his fans this Valentine season.
Because we wanted to known more,we had an interview with *King Paluta*’s manager *Scratch* , where he made it known that, *King  Paluta* just featured this comic actor *Akrobeto* who’s been known in the movie industry as one of the finest talented male actor in the country on a track titled *Yese Yese* which is produced by *King Paluta* himself and Quab Cee. He made it known that, *Akrobeto* did the hook of the song.
Now the question is, *Has Akrobeto stopped acting and diverting into music*like his co. Kwadwo Nkansah ?
Let’s keep our fingers crossed and wait for
*King Paluta x Akrobeto (kumawood fame) x Batheo – Yese Yese prod. by King Paluta & Quab Cee*
Promoted Content