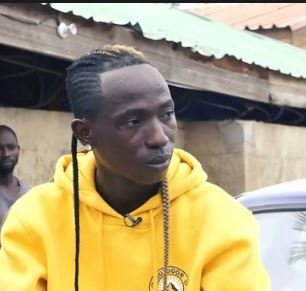 Patapaa’s looks has often been a subject of ridicule ever since he burst onto the scene with his explosive ‘One Corner’ song. It’s even difficult to determine his age when you look at his not-so-good looking face.

Well, they say beauty lies in the eyes of the beholder so several people have embraced him for who he’s. The ‘Skopatumana’ hitmaker is often compared to comic actor and poster boy of Kumawood, Lilwin as to who is uglier.


It’s no secret that people say Lilwin is one of the ugliest Ghanaian celebrities we have hence according to Patapaa, he’s more handsome than Lilwin.

The musician made this known in an interview with Abeiku Santana on the ‘Atuu Show’ when asked by the host if he accepts being ugly as many Ghanaians claim he is.

Patapaa admitted he’s not that good looking but maintained that he is more handsome than Lilwin adding that he (Patapaa) doesn’t have big eyes like the actor.

So we are throwing the question to you, between Lilwin and Patapaa, who is more handsome. Few days ago, Patapaa branded Stonebwoy and Shatta Wale as the finest artists of our time.

“My First Top Act Is Bhim Nation, Stonebwoy, Stonebwoy Over All Of Them, Then I Would Say Shatta. The Rest Of GH Artistes Should Go Home”.