I’m an actress, my collapse was a prank – Fella Makafui 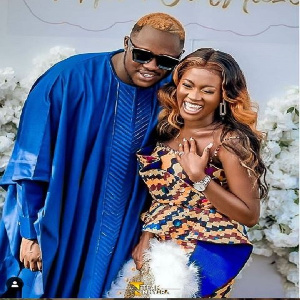 Home » News» I’m an actress, my collapse was a prank – Fella Makafui » Share To..

Mrs Fella Frimpong, wife of Ghanaian rapper Medikal has confessed that her collapse at her wedding was a stunt to test her husband.

According to the actress, the purpose was to find out the gravity of her husband’s care and love for her.

“I’m an actress, I mean I have been pranking him so I was like let me see if he was going to get scared today. I love you so much,” she said.

Fella collapsed whiles dancing with her husband in the full glare of family and friends gathered at the event ground.

According to Kofi Adoma, her collapse caused fury from members of her family who blamed her manager for causing that.

To her family members, the bride has been standing on her feet for long hours, a probable cause of her collapse. They stopped the DJ from playing any music and also halted every other activity at the events grounds.

However, according to critics on social media, her collapse could be as a result of her alleged pregnancy.