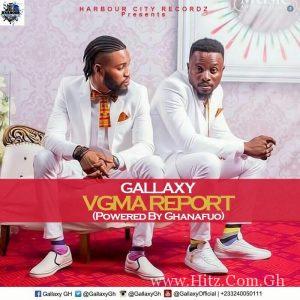 Music group Gallaxy is back again with another song for Charterhous after Ghana Music Awards.

Bra Chicky, half of the group who released “Choices” last year after the annual awards punches holes in this year’s event in a new single he calls “VGMA Report”. The song starts with TV3 News anchor, Bright Nana Amfo’s goof when he said on TV that “Up Next is VAGIMA instead of VGMA”.

In the new VGMA Report single, the rapper comments on the dumsor which delayed the show.

Bra Chicky also talked about the costume Bibi Bright, Berla Mundi and other celebrities wore to the awards. There is no way you can talk about Ghana Music Awards without commenting on the award-winners so Bra Chicky, half of the music group had something to say about the winners.


He asked Medikal not to cry because what happened to him is normal. He applauded Charterhouse for organising this year’s event but gave them 50% adding that last year’s event was better than what Ghanaians experienced on April 8 2017.