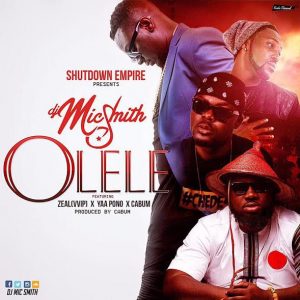 The leader of Shutdown Empire,Dj Mic Smith is back again onto the music scene with another powerful song ‘Olele’  that is yet to be an anthem.The Afrobeats song features   lyricist Yaa Pono,Cabum and Zeal of the legendary VVIP Music group.The song produced by Cabum is timely as we prepare towards the festive season in December and early January next year. The ‘Shutdown king’ who also works with Accra-based urban radio station, Y107.9FM is has a good  history of releasing chart-breaking hits and the chemistry  for ‘Olele’  is one of a kind.

‘Olele’ is a follow up and a major project by the multiple award winning disc jockey after a successful completion of his ‘Afro urban series’ that features the likes of Mr Eazi,Adina,Ko-jo Cue,Teephlow this year.