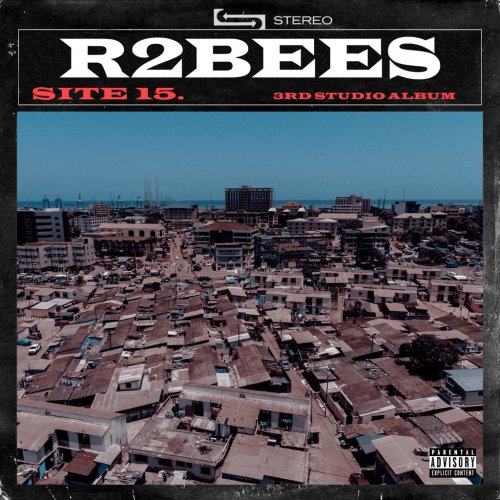 Site 15 is a colourful blend of contemporary afrobeats and highlife songs which finds its strength in the lively percussive beats rather than in its themes.


Albums are a hit or miss even for renowned and established artists. R2bees returns with their third studio album Site 15 a celebration of the community (Tema, Site 15) they represent. For starter, it is alive with features; the likes of Kwesi Arthur, Medikal, Darkovibes, King Promise Wizkid etc.

The freshness of sound and the splash of percussive colors intertwine to give an enchanting vibes. The contrast in moods is well handled when transitioning from a soaring bass-driven ‘Boys Kasa’ to the slower paced and sombre track ‘Never Again’

On the Wizkid-assisted opening song “Straight from Mars”, producer Kilmatic retains the groove and elements reminiscent of the group’s Killbeat-produced monster hit “Slow Down”. Mugeez and Wizkid lace some infectious melodies with a smooth verse from Omar Sterling.

‘Over’, the brisk tempo dance tune has the duo singing about a fall out with a love interest. Though singing is not a forte of Omar Sterling, he somewhat makes it work, complementing the dulcet voice of Mugeez. The infectious instrumental produced by Killbeatz is laced with revered snares, hissing shakers and an ambient keyboard with a counterpoint hypnotic bass line.

On the stand out track “Yesterday” the duo deliver tender affection for a love interest who has qualms about their faithfulness. It is a light hearted mid tempo song which sees Omar Sterling delivering a ditty verse.

The production on the album cannot be overemphasized. It is of top notch quality tenderly crafted by the evergreen producers. From the sinking and funky basses to the airy chords, producers Killmatic, Killbeatz, Streetbeatz, Unklebeatz etc. producers made up for many setbacks on the album while simultaneously carving a niche for themselves as veteran producers.

Though the album has it strengths it still reeks of musical clichés. Themes about women on a 15 song album is repetitive and unoriginal, something afrobeats artistes are yet to forsake. Tracks like ‘Picture’ and ‘My baby’ are also easily skippable